The men’s Final saw two of the event standouts in Rogelio Jr Esquievel (PHL) and Taka Inoue (JPN) go head-to-head. Inoue was fresh off posting the highest tow-wave total of the event in his Semifinal, a 17.25 (out of a possible 20) so Esquievel knew he’d have to dig deep if he was to take a win for the home crowd. The Final saw the lead change back and forth a number of times but it was the local knowledge of the hometown boy the paid off as he picked off a long, perfectly paced wave and competed a number of long nose-rides to post an excellent 8.50 (out of a possible 10) and take the lead and the win in front of his friends and family.

“This is so special to me to win in my hometown.” Esquievel said. “All of my friends and family are here watching me and supporting me and I’m so thankful for that. When we heard that there was a WSL event coming to La Union we were so excited and have been training hard ever since. Taka Inoue has been one of the best surfers all week so it was an honour to compete with him in the final. I’d love to qualify for the World Longboard Tour and this is such a great start.” 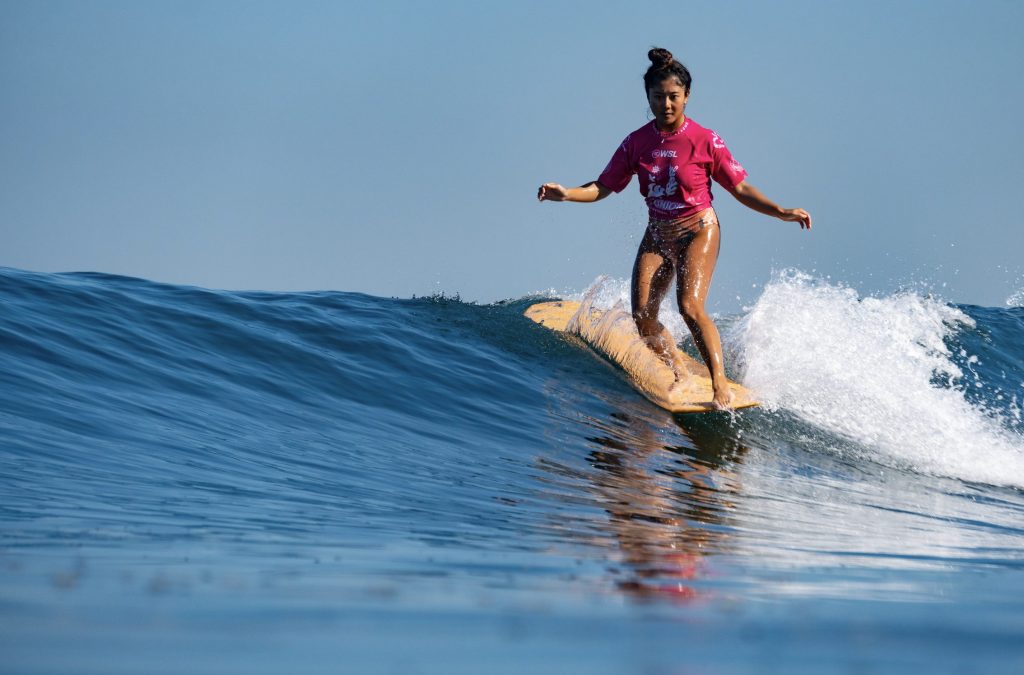 The women’s Final saw Japanese duo Hiroka Yoshikawa (JPN) and Natsumi Taoka (JPN) do battle in familiar settings with the two dominating the domestic scene for the last few years. The pair continued their dominance here in the Philippines, each posting some of the event’s highest scores throughout each round. The Final was one sided for the majority of time with Yoshikawa holding a decent lead and Taoka needing a near excellent score. With only two minutes left, Taoka, holding priority, took off on a set wave and got to work, carving and pivoting in the pocket as well as riding the nose, Taoka posted an excellent score to take the lead and win with a heat total of 15.55.

“I’m so happy with this win,” Taoka said. “I was waiting for a long time at the end to get priority and once I had it I knew a wave would be coming and when it did it was a good one. I’m just so happy that I could do my best surfing on that wave. I’ve competed against Hiroka (Yoshikawa) for so many years in Japan and I know how good she is, so a big focus for me was to make sure I was on the good waves. When that set came I knew I would have to surf it as well as I could all the way to the end and I did. This is a dream come true for me, I’m so happy.”

All four finalists are in a great position to qualify for the 2023 World Longboard Tour through their region of Asia with only one of two more opportunities left to earn points and only the top man and woman gaining a spot.

Competition will now shift its focus to the Qualifying Series (QS) 3,000 event which should recommence in the coming days with more swell forecast to arrive shortly.

Event directors will reconvene tomorrow morning at 7:30 am local time to make another call on the commencement of competition with the necxt rounds of the QS 3,000 event ready to run.

The 2023 La Union International Pro QS 3,000 and LQS 1,000 will run at The Point, Urbiztondo Beach in La Union, Philippines, from January 20 – 26. For more information head to worldsurfleague.com