BALLITO, KwaZulu-Natal, South Africa (Sunday, July 10, 2022) –  Rio Waida (IDN) and Molly Picklum (AUS) have won The Ballito Pro presented by O’Neill, claiming victory in the Finals against Gatien Delahaye (FRA) and Macy Callaghan (AUS), respectively, held in three-to-four foot surf at Bathers Beach.  The third stop on the 2022 World Surf League (WSL) Challenger Series, the Ballito Pro presented by O’Neill has been navigating a challenging forecast but nonetheless provided epic action from some of the world’s best surfers battling to qualify for the elite Championship Tour. The day started with the women’s Quarterfinals and ran alternate divisions all the way up to the Finals. 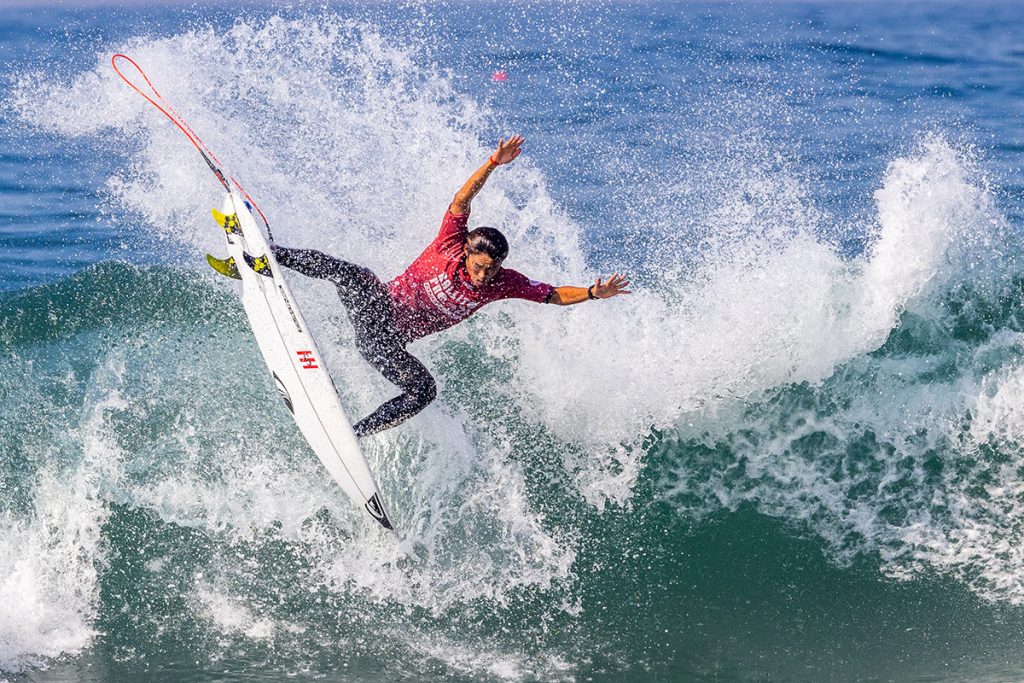 The men’s Final hit the lineup first with Rio Waida (IDN) taking on Gatien Delahaye (FRA) in an exciting matchup where both surfers are highly capable of taking the debate to the air.

Waida pulled the trigger first with a somewhat conservative approach, belting a couple of turns in the opening minute of the Final for a 7.50 (out of a possible 10) and the early upper hand. Waida then found a clean little tube up the beach and added a 5.17 to his total, further applying pressure on the Frenchman whose first few attempts were unsuccessful. While Delahaye seemed affected by the pressure, the Indonesian kept extremely busy trying to up the ante on a succession of rights, well surfed but just below his barrel score.

The Guadeloupe surfer finally found his rhythm at the 15-minute mark with a clean little air for a 5.57 to get right back in the fight. But Waida didn’t back down and threw a crazy reverse over a challenging section to post an excellent 8-point ride and ask a near-perfect requirement (9.93) from his opponent. Eventually, time ran out and Waida claimed his second win of the season on the 2022 Challenger Series. 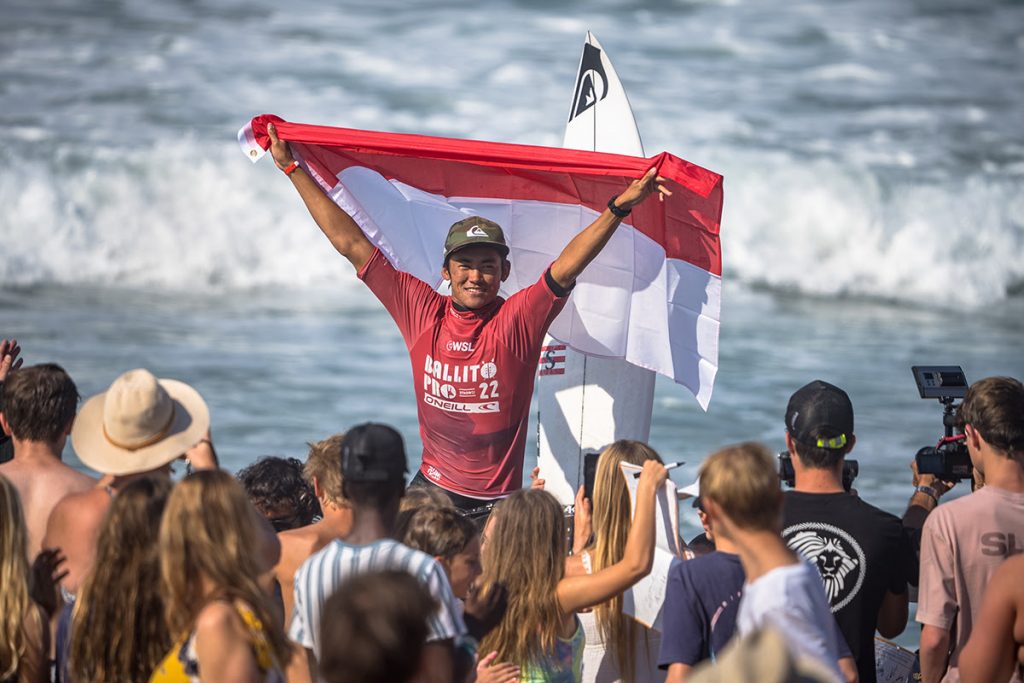 Pictured: Rio Waida (IDN) being chaired up the beach after winning the Ballito Pro pres. by O’Neill. Credit: © WSL/Van Gysen

“It’s crazy to think I just won back-to-back CS events, I’m just speechless,” Waida said. “Ballito is a very beautiful place and people are super nice. Today is crazy with everyone out, it’s actually hard to get to the beach. I’m really grateful for the support of everyone and I hope I get to come back and do this again.”

The dynamic regular foot from Bali has been on an absolute tear lately, winning back-to-back events on the Challenger in Sydney and today in Ballito, as well as claiming wins on the QS in the process and an appearance on the CT at the recent Quiksilver Pro G-Land. He now takes a strong lead on the rankings and with already over 20,000 points is looking like a lock for next year’s elite tour.

“I’m so happy to be representing Indonesia,” Waida added. “We never qualified a surfer for the Championship Tour so it would be good if I made it to show all the groms back there that we can do it. I’ve been working very hard for this and I can’t wait to get back home and see everyone.”

Gatien Delahaye (FRA), a two-time winner on the Qualifying Series (QS) had his own epic run early in the season with two runners-up and a third-place on the European QS. However, he failed to bring his momentum to the Challenger Series and exited in the first round in both Australian events. His runner-up result in Ballito marks the biggest result of his young career and a step in the right direction heading into the rest of the season.

“I’m super stoked, for sure the best day of my life,” Delahaye said. “I spent a lot of time training and getting ready for these events. I had a shocker at the beginning of this year so I had to reset and went to the next contest with another mindset. I took it as a free surf, that’s when I surf my best and that’s what I did the whole contest, I’m so happy.”

With an added 7,800 points to his season tally, Delahaye moved up to 9th in the Challenger Series rankings.

Waida and Delahaye had previously defeated Keanu Asing (HAW) and Leonardo Fioravanti (ITA) respectively in the Semifinals. For his first Challenger Series appearance, Asing posted a huge result which catapulted him up to 18th on the rankings. Fioravanti added big points again and will head to the fourth stop on the Challenger Series as No. 2. 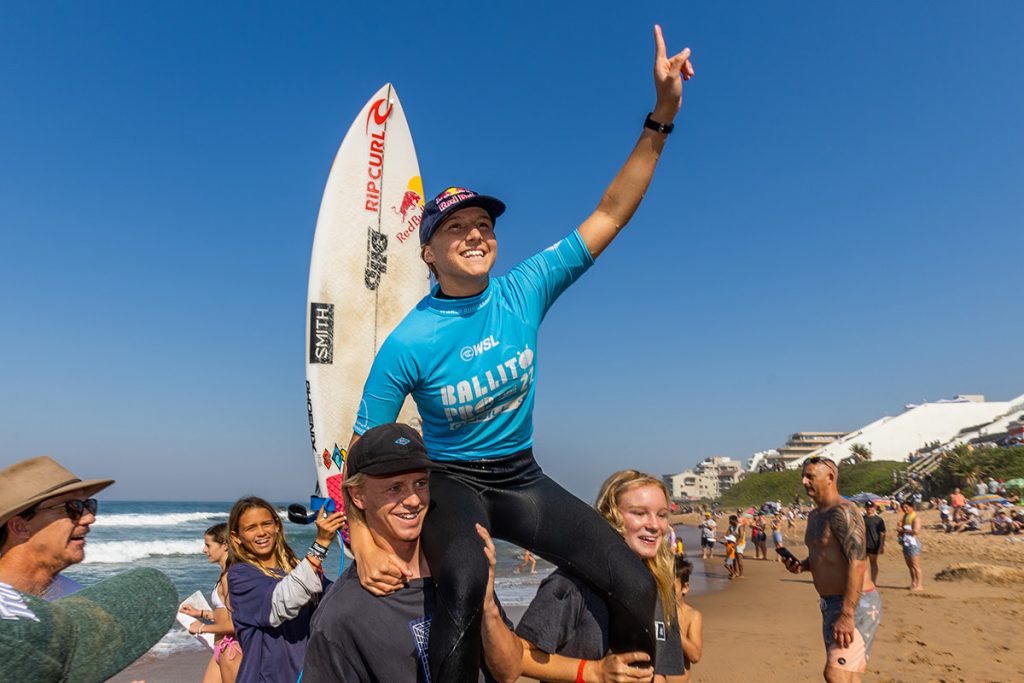 Molly Picklum Back To Winning Form

In an all-Australian women’s Final, former CT surfer Macy Callaghan (AUS) took on tour rookie Molly Picklum (AUS). Callaghan posted the first real score of the Final with a single, powerful backhand hit for a 5.00 (out of a possible 10), and Picklum replied in a very similar fashion for a 4.67 to stay in striking distance of the lead. The more experienced of the two, Callaghan kept building house with a similar short left once again with a 5.67. Picklum switched strategies and went to the rights that saw the men score big earlier and found a 5.83, still in second position but now with the highest score of the heat.

That advantage didn’t last long as Callaghan found a better wall to exploit on her backhand again for a 6.50 and a slightly larger lead into the final few minutes of the heat. With four minutes on the clock, Picklum forced her opponent to show intent on going on a closeout left, switching priority and opening a door wide open for the rookie’s final chance at turning the heat. She did get an opportunity with two quick turns on a left and posted a 6.57 to claim the win in the dying seconds of the Final. 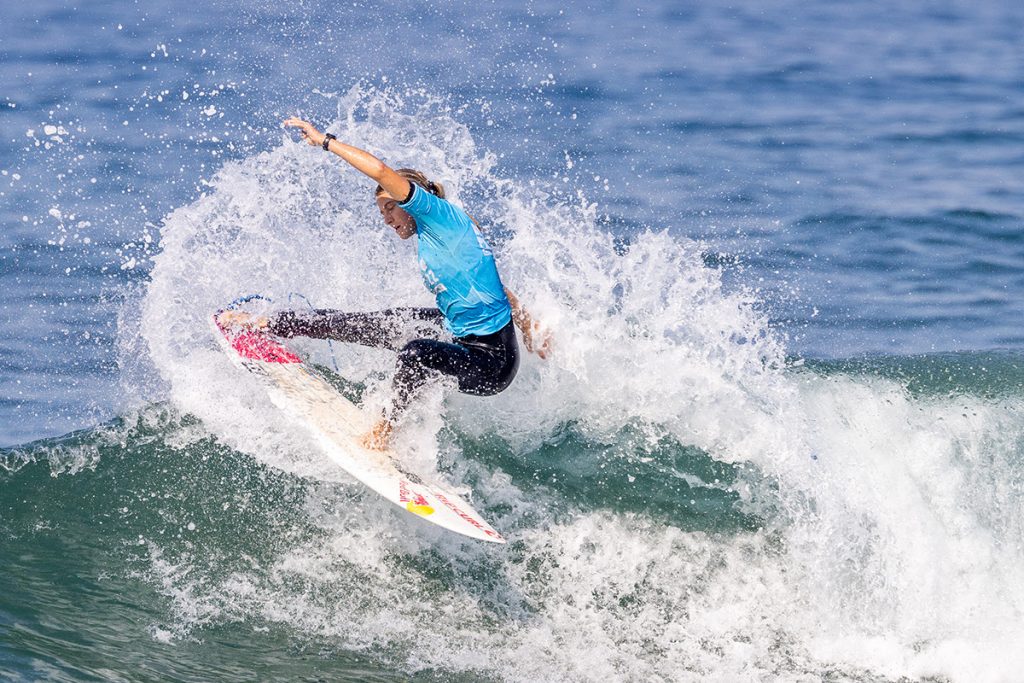 Pictured: Molly Picklum (AUS) jumps up the Challenger Series rankings to No.2 after her win at the Ballito Pro pres. by O’Neill. Credit: © WSL/Tostee

“It feels so good!” Picklum said. “I feel like in this event I really tried to just enjoy the process. Back in Manly I struggled to enjoy it and came here feeling super happy and let my surfing do the talking. Hats off to Macy, she put it to me the whole heat and I really couldn’t find an opportunity. We’re both from the same town so it really is a special way to win.”

A three-time winner on the QS, the young surfer who failed to make the mid-year cut on her rookie year on the CT, came to the Challenger Series with huge motivation to reclaim her spot for next season. With a runner-up on the Gold Coast, a 17th in Sydney and now the win in Ballito, Picklum moved from 4th into 2nd position with five events left on the schedule.

“Winning obviously is really good for qualification for 2023, but it’s just so good to get to the top and I try and go into every contest to surf every heat and to come out on top in the last one is really good.”

After a three-year stint on the Championship Tour, Macy Callaghan (AUS) is back to the drawing board, putting a strong qualifying effort together this year both on the QS with two wins already in 2022, and on the Challenger with today’s runner-up result. Surprisingly the surfer from Avoca hadn’t made it past the Round of 16 on this tour before today.

“Congrats Molly, it’s been an amazing day and an amazing trip to South Africa. Thanks to everyone who came out to watch, today was awesome,” Callaghan said.

Her 7,800 points added points moved her up inside the virtual qualifying Top 5 in the rankings.

Callaghan and Picklum had previously defeated Bronte Macaulay (AUS) and Caitlin Simmers (USA), respectively, in the Semifinals. Macaulay will jump up from 14th to 6th courtesy of today’s result and Simmers further cemented her lead on this year’s Challenger Series rankings.

A number of other surfers made big moves in the third stop of the season, including Summer Macedo (BRA) and Dimity Stoyle (AUS) who jumped roughly 30 spots up the women’s rankings, as well as Frederico Morais (PRT) in the men’s and many more.

With the completion of the Ballito Pro presented by O’Neill, the Challenger Series rankings have evolved, here are the current potential qualifiers for the 2023 Championship Tour: