In his third Final at his home event, John-Mark Tokong (PHL) looked destined to take his second victory at Cloud 9, posting near-perfect totals in his Quarterfinal and Semifinal appearances (18.75 and 19.05 out of a possible 20 respectively). Tokong’s knowledge of his home break never looked more on-song than today with the electric young natural footer getting deeper in the tube than what seemed humanly possible, then coming out and launching flawless air-reverses. The 23-year-old posted a total of nine excellent scores in thee heats on Finals Day.

“I’m so stoked right now I can’t even believe it,” Tokong said. “Last year I got second here and I’ve spent the last year working so hard to make sure I would win – that just makes this feel so sweet. I want to say a special thanks to the late Mayor of General Luna, Jaime Rusillon. We would not be here today if it wasn’t for all of the work he has done for surfing in the Philippines. I’ll always be thankful for his work and have so much respect for him.”

In the Final, as the wind began to turn slightly onshore, Tokong and his opponent Noah Beschen (HAW) began to look more to the air for scores as the classic Cloud 9 tubes became harder and harder to find. The two went blow for blow with Tokong holding the upper hand for the majority of the 40-minute matchup. With only two minutes left, Beschen took off on a set and lined up for a tube that never eventuated which forced him to launch a massive straight air slob grab. Beschen landed the air smoothly and posted an 8.60 to take the lead and what looked to be his first QS victory. That was until Tokong swung on a set wave with 45 seconds and pulled into a deep tube, come out and bashed the lip, posting a 7.80 and taking the final by just 0.05 of a point.

“In the end, I almost gave up because there was no time left and then when that wave came I knew exactly what I had to do,” Tokong continued. “Noah is such a crazy surfer — he does so many airs and is so good in these kinds of waves so it was sick to have a final with him. Being from Hawaii he’s so good in the barrel and at hitting big sections so I loved surfing with him at Cloud 9. I hope that he is back here next year and we can go again in the final.” 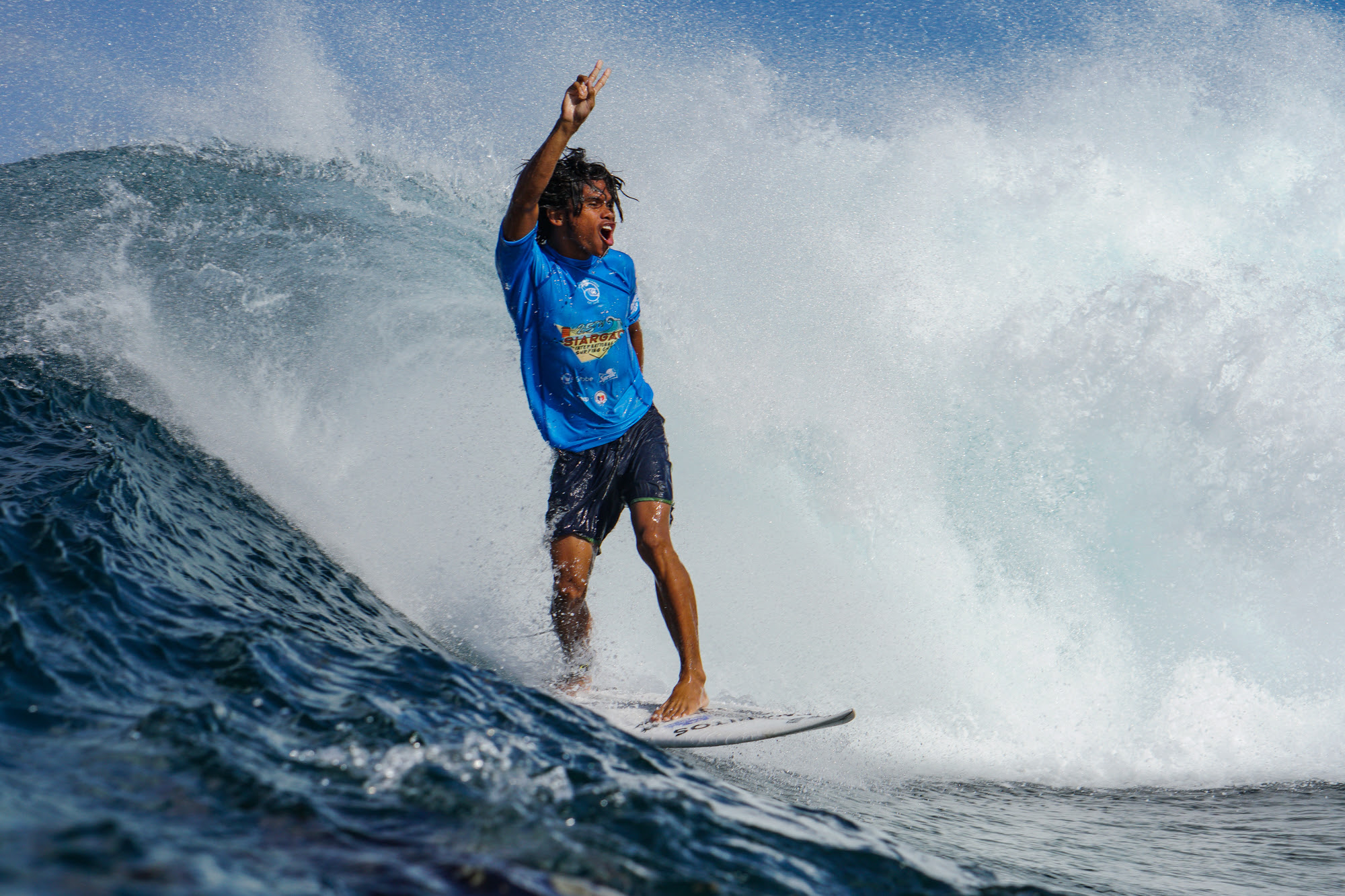 Although his clutch rebuttal air was pipped at the post by a rampaging Tokong, Hawaiian wonder kid Noah Beschen (HAW) was stoked to share such a special final with a local legend and will still leave the Philippines with the best result of his career.

“I am super psyched right now,” Beschen said. “The whole final day was amazing. I scored an 8 and took the lead, there wasn’t much more I could have done so I am super happy. This is by far my best result on the QS event so I feel really good and like I have a newfound confidence. I just want to keep surfing heats and having fun. Hopefully, I’ll win the next one.” 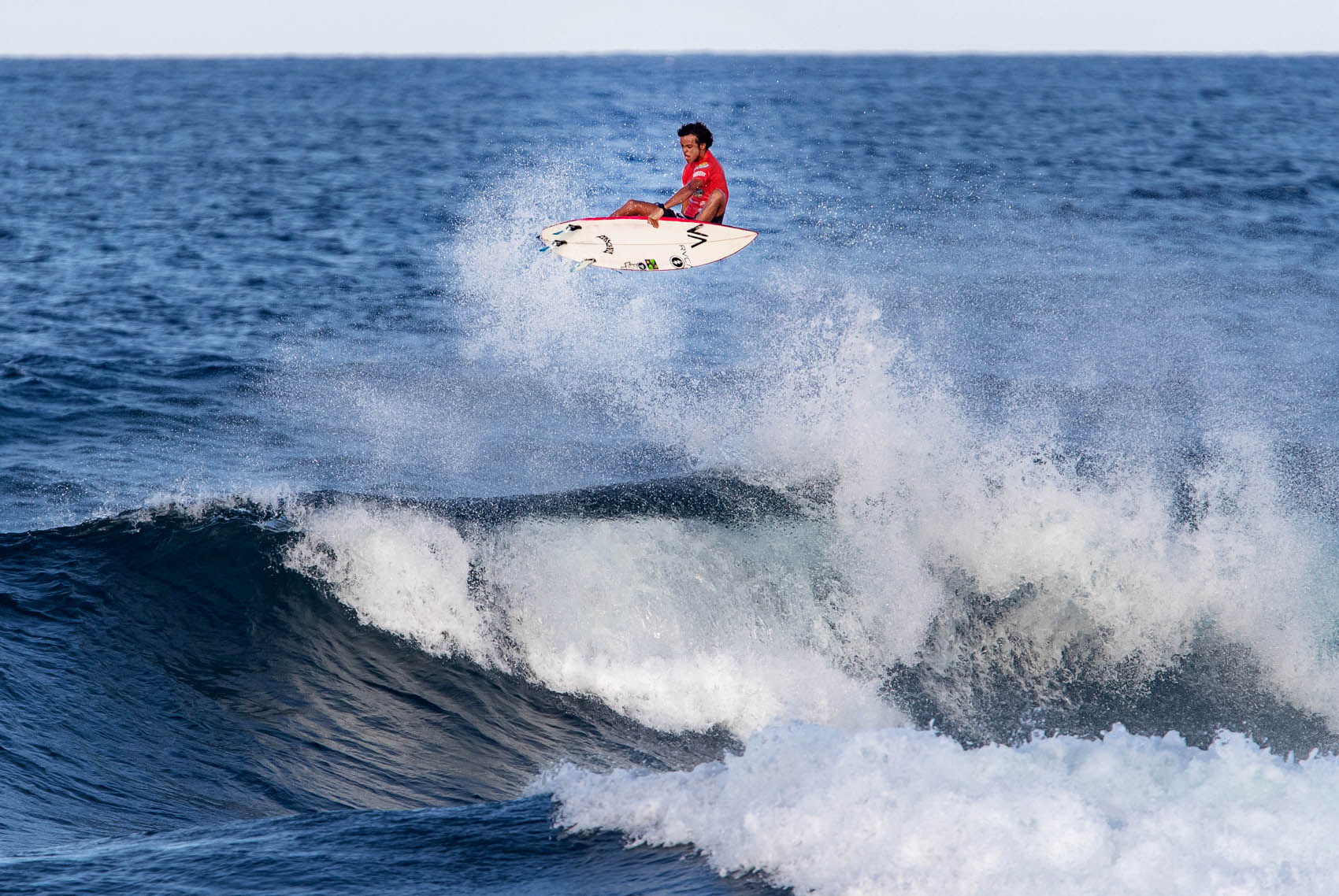 Pictured: Noah Beschen (HAW) with a massive straight air slob grab to clinch the lead in the dying minutes only to have it taken from him seconds later.
Credit: © WSL / Tim Hain

The Siargao Cloud 9 Surfing Cup will ran from October 4 – 9 2019. For more information and to watch the action live head to www.worldsurfleague.com or download the free WSL App.