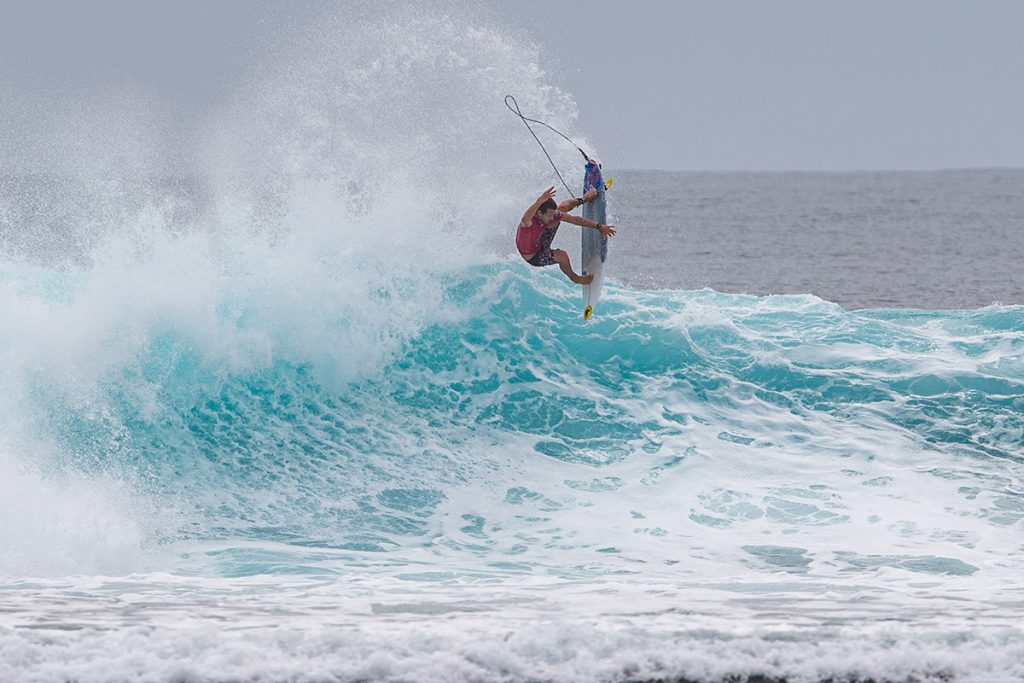 In the Men’s Final, Jesse Mendes (ITA) also seemed to save the best for last as he scored the highest heat total of the Men’s event, 17.83 out of a possible 20, to defeat Billy Stairmand (NZL) for the Krui Pro title. Mendes stuck one of the biggest blow-tail airs seen in the event for an excellent 8.43. Stairmand found some great-looking waves, but uncharacteristically fell and couldn’t finish his rides, losing out on bigger scores. Mendes found a beautiful, long runner and displayed powerful, flowing surfing for a near-perfect 9.40, putting Stairmand in a combo situation.

“I feel so blessed to be here, we’re so fortunate to be surfing these waves. I feel like the best conditions showed up for Finals Day. It’s probably the best left I’ve surfed in a heat,” Mendes said. “I want to congratulate Billy, we’ve been on the road for so many years. It was a pleasure to have a Final with him, he’s been ripping the whole contest as well as all the boys. Thanks to everyone here at Krui.”

Sophie McCulloch (AUS) seemed unstoppable in this event and she went all the way to claim the Krui Pro Women’s title over Ella McCaffray (USA). It was a slower heat, but McCulloch’s strong carves and turns bagged her two 7-point rides for a total of 14.93. McCaffrey was left chasing, but couldn’t find the score to rival McCulloch.

“I’m really happy, it’s probably the biggest win of my career so far. I’m feeling really content. It’s good to get all this experience on my backhand in these waves. I think I could’ve pushed my surfing more in that final, but I’ll take it and improve into the next event,” McCulloch said.

“That was pretty much one of the best heats I’ve surfed,” Thomson said. “One of the smartest heats for sure, good wave selection and pushed my turns a bit more. Being in a Final with those boys, they’ve been dropping hammers all week so it was scary!”

The Pro Junior Women’s Final was a tight battle between the strong Japanese contingent of Sai Maniwa, Sara Wakita and Nanaho Tsuzuki and the young Australian Willow Hardy. Maniwa opened the scoreboard with a strong 7.50 to put the pressure on the rest of the field and Hardy answered the call with an excellent 8-point ride. With less than 2 minutes on the clock, Maniwa required a mid-range score. With priority on her side, she weaved four strong turns together on a medium-sized wave for a 5.83 to take the win with a total of 13.33.

“I’m extremely happy! I got pretty good waves, I’m just so happy. All the girls in the Final were ripping! Thanks to all my sponsors, my coach and my family’s support really mean a lot to me.” Maniwa said.

Competitors now move on to the Nias Pro where Indonesia’s premier right-hander will host the next Men’s and Women’s QS5,000 from 22-28 June 2022. Follow all the action on the WSL App and WorldSurfLeague.com